How to implement an internet facing FreeBSD IPFW firewall

I am a FreeBSD user since version 2.2. I used IPFilter as my first packet filtering firewall on FreeBSD. It is still in the FreeBSD base system, but I guess not widely used anymore. When PF was ported to FreeBSD, I started using that and have used it ever since.

But that changed a little while ago, so I’ve decided to write about it and share my insights and gained knowledge about this subject. So this blog post is about implementing an internet facing firewall using FreeBSD IPFW! And we do this by using an example design which is described in the first 3 sections below (Diagram, The requirements for this setup and, Some starting points).

The (imaginary) setup used for this blog post is shown in the diagram below. 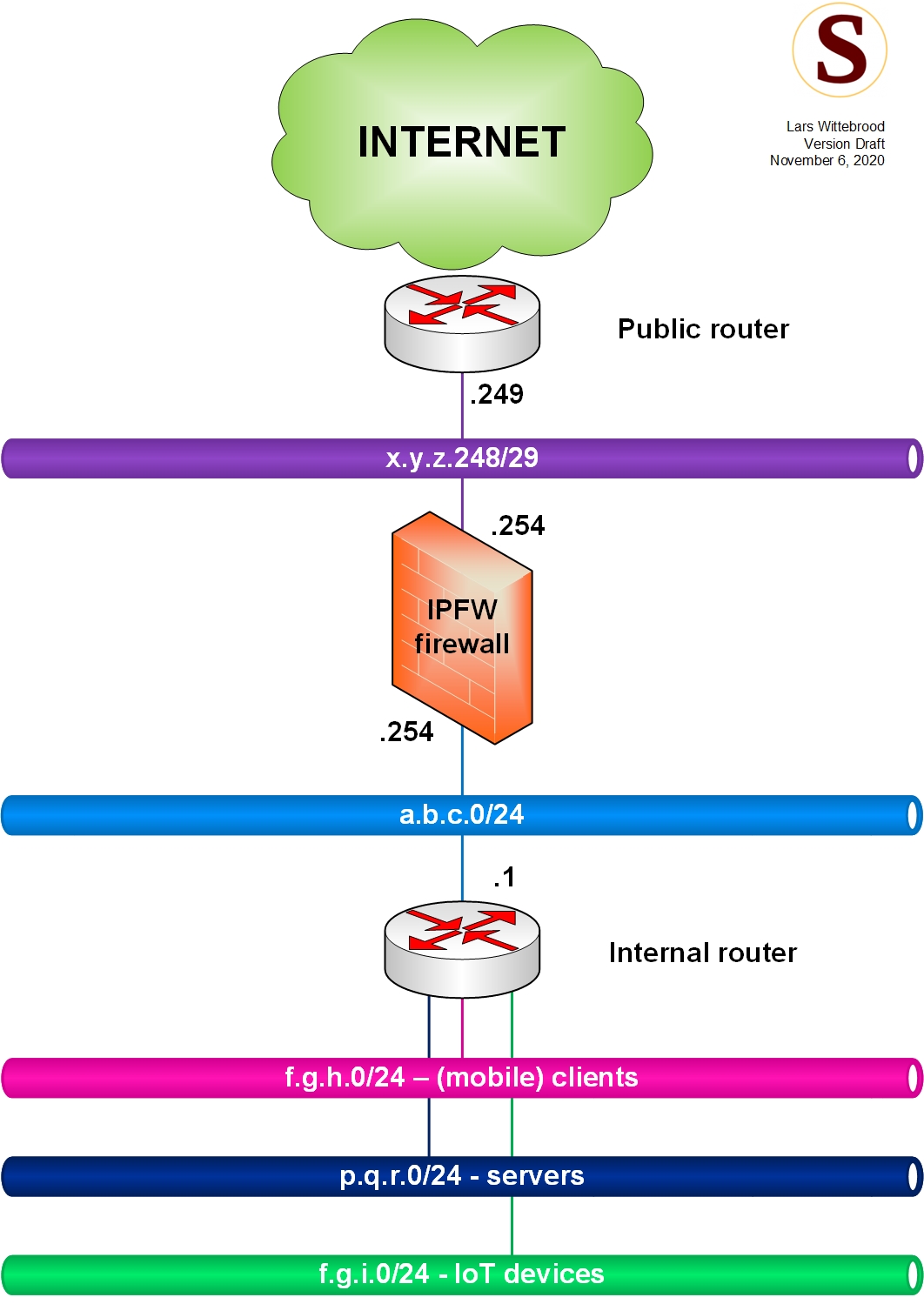 The requirements for this setup

The high level requirements for this setup are:

And last but not least: it is assumed that all commands are done using the root user of the firewall.

Base setup of the firewall

Some other important aspects of the firewall host configuration are covered first, before we dive into the implementation of IPFW:

Setup of the interfaces

We set the default gateway to the IP address of the internet router:

And we also have to define some static routes on the firewall to be able to reach the 3 internal networks:

We have a requirement to log all IPFW blocked packets so we enable system logging:

We want to access the firewall through SSH on its internal interface only, so we harden the default SSH configuration a bit:

The setup of IPFW

The first item to configure for an IPFW based firewall is to make sure that the FreeBSD operating system can route packets between the 2 interfaces:

Next is to enable IPFW and set the name of the script for the IPFW firewall rules:

And we also want to do Network Address Translation. This is enabled through the command:

As we have enabled Network Address Translation, we also have to set the following kernal state variables:

We also want to enable and configure logging of blocked packets. The first step is to enable the firewall logging:

To enable logging to system logging we have to set the following kernel state variable:

With this IPFW logs to the security facility. And we do not want any limits for our logging, so we also set:

And we also have to configure system logging:

We are almost there, only 1 item to configure before we can go and define our firewall ruleset. We want to be able to reload (or restart) our IPFW rules while we have a SSH session with the firewall. To be able to do this we need to set a kernel state variable:

The IPFW ruleset is a shell script and we have configured that the file of this script is /etc/ipfw.rules. The rights on this file are 0644 and the file is owned by the root user and wheel group.

The IPFW ruleset we build consists of the following parts and each part is discussed in more detail below:

We define the inbound rules before the outbound rules as packets always arrive inbound first on an interface.

The start of the rules script

The start of the IPFW rules script consists of the following lines:

The first line states that this is a /bin/sh shell script. And the real first command flushes the rules, such that we always start with a clean ruleset.

Before we start with the actual firewall rules we first set some (example) variables (see below). Most of these variables are self explanatory and come from the The starting points chapter above.

The start of the IPFW configuration

So with all the variables known and filled in we can start with the actual ruleset for our internet facing firewall. In the first line we disable one_pass, which makes sure that the packet is reinjected into the firewalll at the next rules, which we want.

In the second line we define a NAT instance (with number 1) for incoming traffic on the external public facing interface (in this case em0 or ${varNICPub}):

Next we define our first numbered rules in which we set no restrictions on the loopback interface of the firewall:

Then we queue and reassable possible IPv4 fragments (see more detail in the IPFW manual page):

And define the NAT for any IPv4 inbound packets (the number must be the same as above!):

Now it is time to check the packets against the dynamic ruleset (aka check-state):

The last part of the start of our IPFW configuration is to deny all partial packets:

After we have setup all the basics it is now time to define the inbound rules. In this example we use the following rule numbers for our inbound rules:

And both rule numbers 1499 and 1999 are used for the deny all rule on the interface.

We start with defining the rules for (known) traffic which we do not want to log for the public network interface, like i.e. Multicast addresses:

If needed or required you can add any additional rules here.

For this example we only allow incoming ICMP traffic on the public interface (from the whole internet):

And we close of with the deny rule for incoming traffic on the public facing interface (em0):

We use the next rule to allow traffic to the internet from our internal networks and the internal router. At this stage in the ruleset the outgoing Network Address Translation still needs to happen! We allow all IP based traffic here and the allowed traffic will be narrowed down at a later stage in the ruleset when we define the outgoing traffic on the external interface.

And as the last rule for the incoming traffic on the internal interface we block and log all traffic:

The inbound rules are all defined, so we now continue with the outbound rules. In this example we use the following rule numbers for our outbound rules:

And both rule numbers 2499 and 2999 are used for the deny all rule on the interface.

We define the outbound rules on the public external interface for traffic coming from the firewall itself first:

These rules allow the firewall itself to:

With the outgoing traffic flows for the firewall itself all done, it is now time to define the allowed traffic from all the internal networks ‘behind’ the firewall. And we begin with the DNS traffic:

The first 2 rules allow the internal name servers to perform name resolution to any name server on the internet. And this is allowed as well from the whole IoT network (see rule numbers 02103 and 02104, we assume that we can not configure the DNS settings of the IoT devices we have!).

We also allow NTP traffic out from all our internal systems:

With the DNS and NTP traffic defined we now define the allowed traffic from each of the internal networks:

The allowed traffic from our server network:

The allowed traffic from our clients network:

The allowed traffic from our IoT network:

And allow TCP traffic from the internal router:

And as the last allowed rule we allow ICMP traffic out from all internal networks:

And as the last rule for the outgoing traffic on the external interface we block and log all traffic:

We define the outbound rules on the private internal interface for traffic coming from the firewall itself first:

This rule allows the firewall itself to log to the defined syslog host. We have no other requirements for outbound traffic on the private internal interface so the next rule is to deny all outgoing traffic from this interface:

The last part of the IPFW configuration

We have to add 3 more rules to finish our IPFW firewall ruleset. And the first is to have a deny everything rule:

The second, and very important, rule is the rule for the outbound Network Address Translation. This rule is used by the outbound rules on the public external interface (se rule numbers 02101 - 02301) which have the ${varSkip} variable in the rule!

And to allow all the return traffic we have to specify the last rule below:

Note: the above rule is mentioned in a lot of IPFW documentation, but I have not found a proper explanation why this rule is needed. So I’ve experimented with it not using it. But I could not get my rule set working without this rule. I saw that no return traffic was happening without this rule, so that must be a valid explanation.

The complete ruleset as described above is also available in a seperate file which you can find here.

When you have done the IPFW implementation, you also want to see what ruleset is loaded and which rules are used (or not). Luckily provides IPFW some commands for this.

To see our loaded ruleset we can issue the command:

And to include accounting records use the command:

This same is accomplished with the command: # ipfw show.

And to also include the last time a chain entry was matched us the command:

To clear the accounting packet counters use the command:

To reload the rules in the /etc/ipfw.rules file you can use:

Please be aware that this last command can only be used if you have set the net.inet.ip.fw.dyn_keep_states kernel state variable to 1!

An example configuration of an internet facing FreeBSD IPFW firewall is described above. A whole lot more is possible with IPFW, like e.g.:

Some (other) resources about this subject: